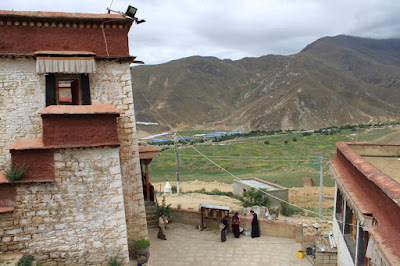 Pobonka Monastery above Lhasa. One of the oldest sites in Buddhism and a mysterious place with invitations to watch several ceremonies, seeing Tibetan eagles, grand yak butter candle lit temples and hermit caves and chanting ceremonies with old & young monks 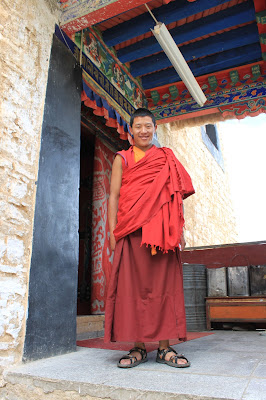 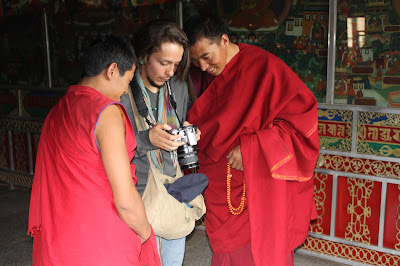 One of the younger monks at the Rigsum Gonpo Temple. He would sweep the floors, dust the tapestries and cases and arrange the prayer books and ceremonial bells and countless shrines. He followed George and I  around the temple like a lost puppy. 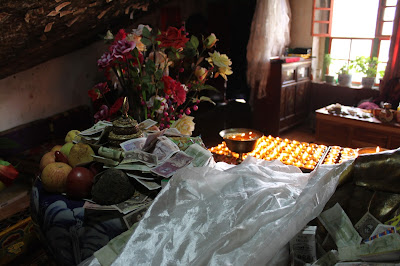 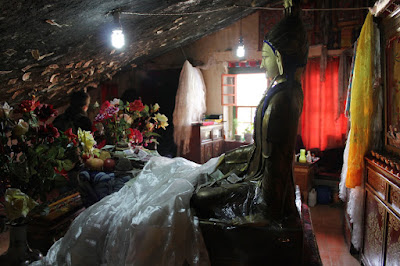 The  ancient hermit priest, Palden Lhamo meditative cave with paper money and prayers glued to the ceiling, sacred prayer scarfs and offerings of fruits and candies left by pilgrims. 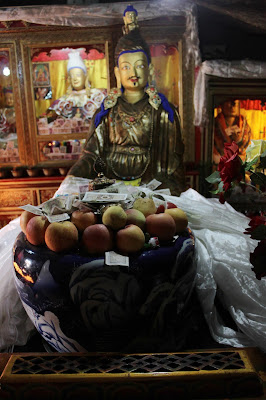 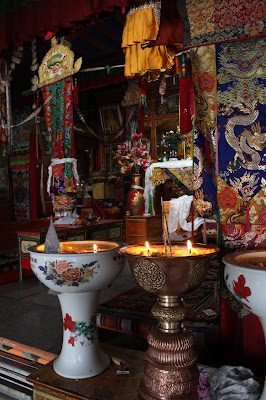 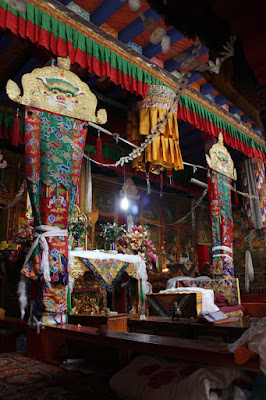 The Rigsum Gonpo Temple with beautiful tapestries, sacred relics and offerings. The light steamed through the small windows and filtered into the small nooks and crannies and wonderful colors would break out and glow on the walls and ceilings 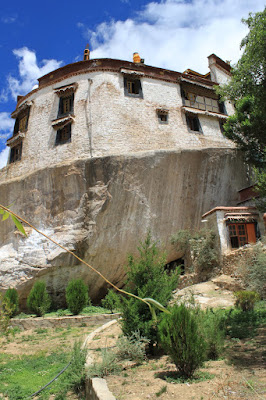 The She-Turtle boulder temple where the morning and afternoon prayers would take place. Built in the 7th and 11th century and where the Tibetan alphabet was created. 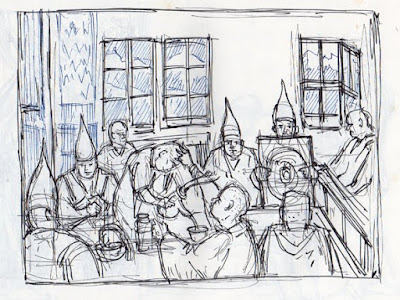 We were invited in for a chanting ceremony where the senior priest was training the monks sequencing and timing of ceremonial songs & words. Young apprentices would circulate around pouring fresh, hot yak butter tea while being joked with (rubbing the kids heads)by the elders. One monk would display sacred ancient art and mandalas. 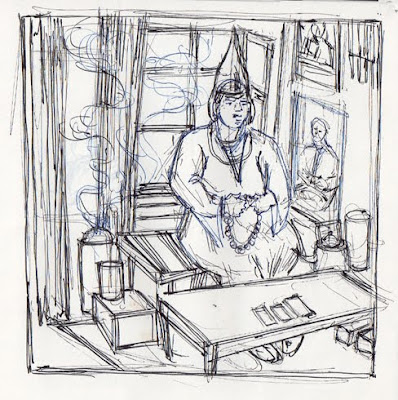 Yellow hat monk chanting, meditating and counting prayer beads in a room off the main hall. These are quick choppy little sketches done as we moved from one ceremony to another 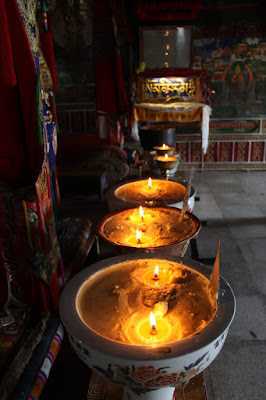 The large vats of yak butter candles softly lighting the main temple hall. At the end of the row is a "self arising" sculpture of sacred letter carving. The mood was calm and beautiful with several monks sweeping the floors, incense drifting through the shrines with soft afternoon daylight 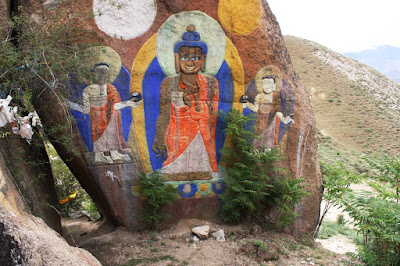 Colored carvings of wives of Chinese Buddhist kings. We would stumble onto these hidden bas-relief sculptures as we hiked up the hills. These were scattered throughout the upper temple grounds 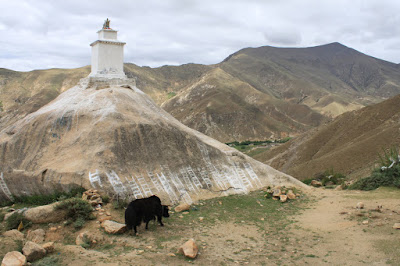 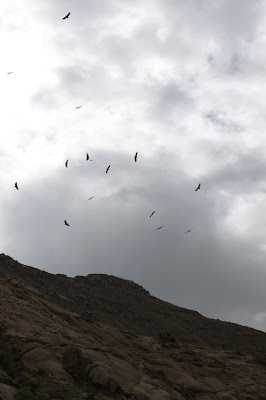 Tibetan "eagles" Vultures circling over the sky burial site above the temple. These bids are huge with six foot wings and look very majestic soaring in the air. 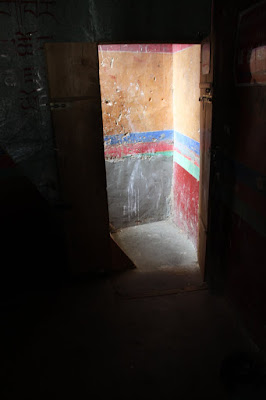 Colorful hallways emerged from darkened temple halls and monks rooms as we wandered through the multi-layered temple. Ladders lead up into the daylight through these stairwells 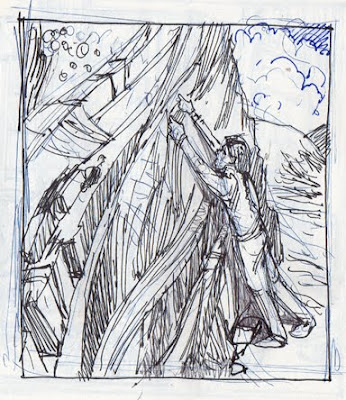 Placing written paper prayer offerings into the stone cracks of sacred wall below the main temple for blessings and luck. 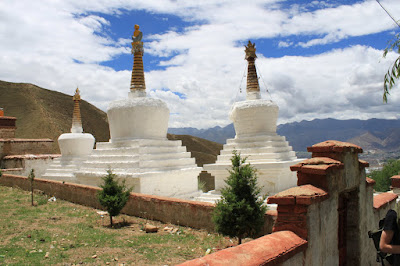 Chorten temples overlooking the Lhasa Valley. Above this temple was the sky burial site with many Tibetan eagles swirling through the skies feeding on human ceremonial remains 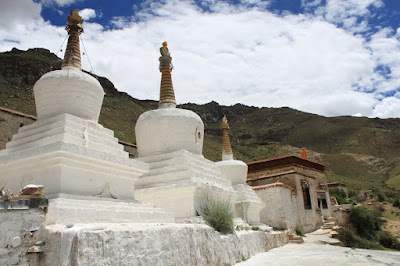 These white chortens structures dot the landscape with golden spires reaching into the sky. 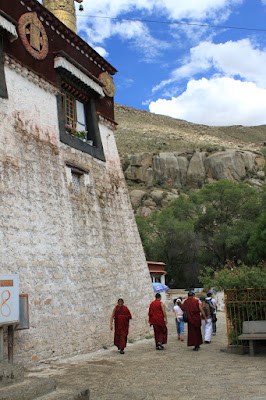 Sera Monastery outside Lhasa. Monks heading to the debating yard. One of largest monasteries with acres of temple buildings and residences outside of Lhasa, Tibet. We stayed until all of the tourist buses left and we had the complex all to our selves. 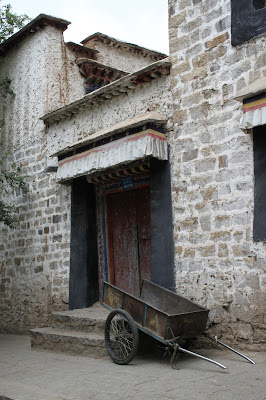 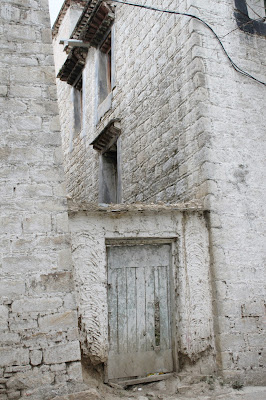 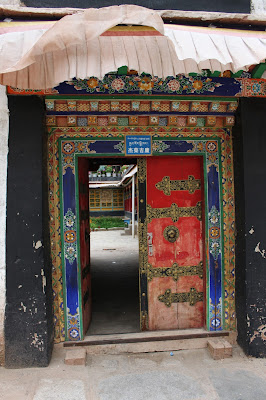 Just a couple of the various many doorways doors the Sera Monastery. The monks residences compounds, small temples and the occasional priests courtyards all had individual painted decorative designed double doors. 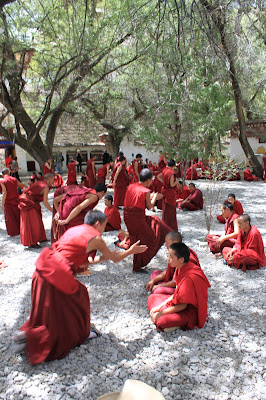 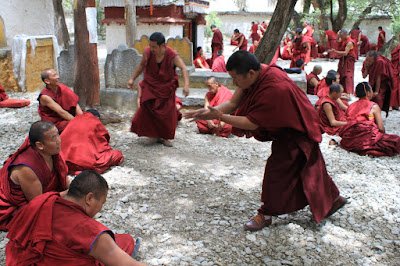 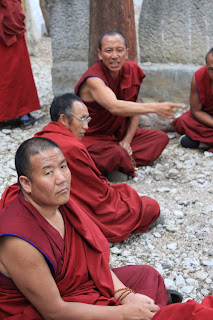 Tibetan monks debating in the moment (a question only exists for a moment and is gone) and then with clapping of the hand it is over. The debates are over philosophy and Buddhist teaching. 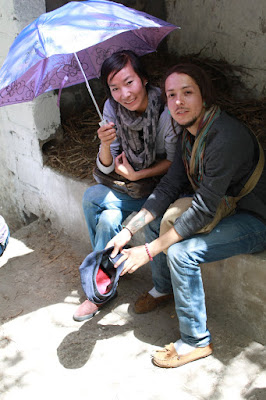 George and our guide resting in the hot sun right out of the sound of the debating monks
Posted by Abi Savage at 10:09 AM